GTA San Andreas was released in 2004 and has over 27.5 million copies sold to date. The game is a classic and one of the biggest hits of Rockstar’s open-world and crime series. GTA San Andreas has a total of 100 missions, many controversies, and a huge amount of mysteries and easter-eggs. The game has made a hit in the gaming world, creating a legion of fans and encouraging a series of re-releases that make it possible to enjoy the game even today on newer PCs and consoles.

The variety of platforms for such an old game – close to turning 20 years old – is impressive: San Andreas is available for PlayStation 2 (PS2), Xbox, and PCs, has Xbox 360 and Xbox One compatible versions, as well as PlayStation 3 (PS3) and PlayStation 4 (PS4), and even Android and iPhone (iOS) editions.

1 – How many missions does GTA San Andreas have?

GTA San Andreas is the game with the most missions among all titles in the series: there are 100 in total (101, if you count the introductory mission as well). Los Santos, the game’s main city, is the scenery for 29 of them, while San Fiero and Las Venturas host most of the remaining stages.

The story follows the return of the main character Carl Johnson (CJ) to San Andreas after the death of his mother. It all revolves around CJ’s efforts to uncover the truth behind the murder, rebuilding his gang in the process, and facing rival criminal gangs as well as corrupt police officers.

Those who get 100% completion in the game get some perks: a million dollars, infinite ammo, cars with double the endurance on any vehicle used by CJ, as well as free access to a fighter and a war tank.

Rockstar’s games, both in the GTA series and in Red Dead Redemption, seek to strike a delicate balance between gameplay, fun, and simulation aspects. San Andreas is an important milestone in this philosophy, being the first in the series to offer aspects typical of role-playing games.

In San Andreas, it is necessary to eat and make the character exercise to keep fit and gain strength, elements that persist similarly even in GTA 5, or in Red Dead Redemption 2, where the player must take care of the appearance of Arthur Morgan, the main character of the title.

3 – What were the big polemics?

As a typical game of the GTA series, San Andreas was not far from a series of controversies. In Germany, for example, the local edition of the game eliminated some features of the conventional version. Among them, shots that removed enemies’ heads and the chance that each eliminated opponent would drop some amount of money on the ground.

However, the biggest controversy involving GTA San Andreas has to do with the Hot Coffe mod. The modification for PCs appeared shortly after the arrival of the game on the market and released access to sexual relations between CJ and call girls, content that had been blocked by the developers.

The repercussion was enormous, which led the United States content classification body to modify the status of GTA San Andreas to “exclusive for adults”. Thus, the permission to sell copies of the game in stores was restricted and the title was removed from many shelves. The game was eventually banned in Australia and Rockstar even conducted a recall, re-releasing a version of the game without access to the sex minigame a few months later.

GTA San Andreas, even released in 2004, tells a story set in the year 1992. An interesting aspect regarding the narrative of GTA San Andreas is the attempt to portray a series of historical episodes that happened in Los Angeles and California in the 1990s, such as gang clashes, disasters, and crimes that mobilized public opinion.

5 – What kind of content was cut from the final version?

The final version of GTA San Andreas differs from some betas that exist for the game. In addition, programmers explored the game’s files over the years and identified several modifications: characters removed or looking different, missions with different objectives, and even completely cut from the final game.

Among this large amount of material that was not used, there are even gameplay differences: if CJ killed an NPC on the street, for example, a TV station van would arrive on the scene to begin reporting the occurrence. Another modification has to do with the collision with poles: if the player were to hit a pole on the street, a worker would appear to repair the damage. If CJ eliminated the technician, the pole would remain toppled for some time.

There are also references to the fact that the player could become a casino owner and use a car wash, just like in GTA IV. Among the game, files are complete 3D models of animals, which would populate the rural areas of the map, but were never actually applied in the final game. 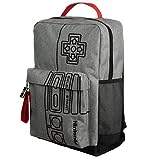