Techidence
Home Reviews Moto G8 Play vs Moto G8 Plus: Which Should You Buy? Motorola launched two new smartphones las year. Breaking the tradition of announcing only one Moto G line per year, the models that reach the market are the Moto G8 Play and the Moto G8 Plus. Although they have different specifications, both bring positive attributes in their specifications – the first with attractive price and the second with more advanced specifications.

One thing in common between the successors to the Moto G7 Play and the Moto G7 Plus is the triple camera, in addition to facial unlocking features and long-life batteries with the possibility of fast charging. You can find the G8 Play in black and magenta, while the G8 Plus is available in dark red and sapphire blue. In the following paragraphs, you can check the comparison between the two phone models.

The Moto G8 Play has a 6.2-inch screen and 720 x 1520 pixel resolution (HD+). The Moto G8 Plus offers a slightly larger 6.3-inch display. However, in terms of resolution, the difference with the Plus model is more significant, corresponding to 2280 x 1080 pixels (Full HD+). The device also has an IPS LCD panel. A common feature of the device’s display is the elongated 19:9 format, which has already become a Motorola classic.

The devices have a similar design, with the presence of notch in drop format. Also, they both occupy the top left side of the rear face with the camera set – located in the same position as the iPhone XS.

Motorola’s releases come with everything in the picture. Both come equipped with a triple camera but differ in power. The G8 Play photo set is distributed in ultra-wide 117º with 8 MP, 2 MP depth sensor, and the main camera with 13 MP. In the case of the G8 Plus, the configuration is of 48 MP in the main camera (with Quad Pixel technology), 16 MP in the action camera and 5 MP in the depth sensor. The difference in the front camera of the devices is 8 MP with f/2.2 opening in Play, against 25 MP with f/2.0 opening in Plus.

According to Motorola, the processor used in the Moto G8 Play is 30 percent faster than the Qualcomm Snapdragon 632 in its predecessor. In this case, the launch comes equipped with a MediaTek Helio P70M octa-core with 2.0 GHz speed. Besides, the product features 2GB of RAM and 32GB of storage and MicroSD card insertion space of up to 512GB.

Meanwhile, the Moto G8 Plus uses Qualcomm Snapdragon 665. It is an octa-core intermediate processor with up to 2.0 GHz speed in the four main cores and 1.8 GHz in the four remaining cores, used in power savings. As for RAM, the device offers 4 GB, while the storage space offered is 64 GB, and microSD memory cards of up to 512 GB are also compatible.

READ:  EMUI 10 is Official: All new and compatible Huawei and Honor Phones

Both phones offer great advances when it comes to the battery. Both come with 4,000 mAh of capacity, which should ensure a full day’s use away from the socket. The devices also offer the fast charging feature, but the G8 Plus model takes the edge off by leaving the factory with the 15W TurboPower system, faster than the G8 Play compatible 10W charger.

Both G8 Play and G8 Plus come out of the factory with Android 9 (Pie). They are expected to receive updates for Android 10, which features dark mode.

An interesting feature on both devices is the fingerprint reader located on the back of the device, integrated with Motorola’s “M” brand. Also, the releases still contain facial recognition sensors. On the other hand, the G8 Play does not have the NFC, a feature present in the G8 Plus – which may represent a differential grid for some users, especially in data transmission and payment by contact with machines.

Other features to be mentioned in the Moto G8 Plus are the Bluetooth 5, traditional headset connector, dual-chip, and stereo speaker from Dolby, which promises clearer and more realistic audio in the display of videos, music, and games. Meanwhile, the Moto G8 Play comes equipped with Bluetooth 4.2 and USB connectivity within the new USB-C standard. 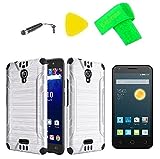