TCL was the first manufacturer to opt for MiniLED backlighting. It did so before Samsung, Philips and LG decided to integrate this technology into their LCD panel TVs.

The X925 PRO and X925 models that have just been presented incorporate very interesting innovations. Both TVs integrate a 10-bit MEMC QLED MEMC LCD panel with 8K resolution, 120 Hz, and MiniLED backlighting, which reflects that they are two high-end devices. And, as we are going to see below, on paper they have a very neat sound.

QLED, MiniLED, 8K, and HDMI 2.1: these are the assets of TCL’s bet in the high-end range

As the name suggests, the X925 PRO and X925 models have a lot in common. As I mentioned above, both incorporate a QLED 8K LCD panel with MiniLED backlighting, a native refresh rate of 120 Hz, and HDMI 2.1 connectivity. In addition, they can process all the most popular HDR formats currently (Dolby Vision IQ, HDR10+, HDR10, and HLG), which in this field puts them in the same league as Panasonic, Philips, and Hisense.

One of the features favoring the X925 PRO model over the X925 is that the former incorporates OD Zero (Optical Distance Zero) technology developed by TCL. Thanks to it, this manufacturer has managed to reduce the thickness of its TVs to between 1.5 and 2 cm and has achieved this by eliminating the lens that was responsible for scattering the light emitted by the LEDs, which are now so many and so close together that they can remain completely glued to the LCD panel, and still ensure an even distribution of light. We will see how this innovation performs if the opportunity arises to thoroughly test the new X925 PRO.

One consequence of incorporating OD Zero technology into the X925 PRO is that the latter is slimmer than the X925. In addition, TCL delivers it together with a rather nice aluminum and methacrylate cabinet with an integrated soundbar that, as we will see below, has been designed by this Chinese company in collaboration with Onkyo. The X925 model incorporates a traditional central stand, so we can expect it to be significantly cheaper than its big brother.

TCL has confirmed that both models implement the full HDMI 2.1 standard, so we propose ALLM, VRR, and eARC technologies, in addition to being able to pick up 4K signals at 120 Hz. What we don’t know yet is how many HDMI ports implement the 2.1 standards. Let’s keep our fingers crossed that it will be all four and not just one or two, as most manufacturers do.

READ:  MicroLED, MiniLED, QNED and Crystal LED: All You Need To Know About New TV Technologies

As we are seeing, on paper these TVs look good. The combination of a state-of-the-art QLED LCD panel and MiniLED backlighting should ensure high overall picture quality, something we look forward to seeing. However, like any other 8K TV, one of the critical challenges they necessarily have to solve is scaling 4K and Full HD content to this resolution. If the opportunity arises to test them we will see how they perform in this usage scenario.

As I mentioned a few paragraphs above, the sound of these TVs has been executed by TCL in close collaboration with Onkyo (at least this is what the Chinese brand promises). The X925 PRO model implements 5.1.2 channels, and its generous speaker endowment is excited by a battery of class D amplifiers capable of delivering a combined power of 160 watts. Not bad at all. In addition, this TV takes advantage of wall reflections to recreate a convincing surround sound, always according to what TCL promises us.

The audio of the X925 model is less ambitious, although it doesn’t look bad. This TV implements 2.1 channels and incorporates an amplifier section capable of delivering a maximum total power of 60 watts. However, like its big brother, it is capable of processing Dolby Atmos content.

Pricing and Availability for TCL X925 PRO and X925 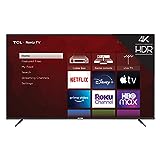